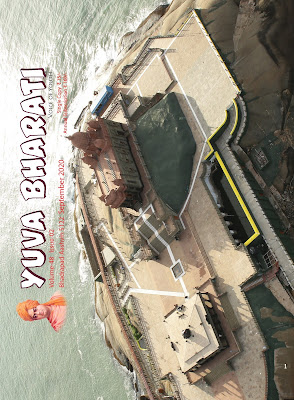 The exclusive approach considers one’s religion as the only true religion. Once this exclusive approach is internalized then others’ religions are not tolerated. This intolerance impels the followers of exclusive religion to set out on large-scale conversion of others by fraud and force. Swami Vivekananda was aware that the exclusive approach of the Semitic religions like Christianity and Islam was responsible for so much bloodshed and human massacre in the human history. It is this exclusive approach which is the biggest obstacle in the realization of brotherhood of man. It is well-known that Swami Vivekananda addressed the audience as ‘Sisters and Brothers of America’; it had an electrifying effect on the audience. It was not merely a form of address but behind those words was the great spiritual strength of India, which has always practiced the universal brotherhood in her long history of more than 5000 years. Taking pride in this fact Swami Vivekananda said, "I am proud to belong to a nation which has sheltered the persecuted and the refugees of all religions and all nations of the earth." Hindus could have this universal approach because they never claim that, 'the God I worship is the 'Only True God' But they say that there is ‘only God’. Everything is the expression of that One.

The Hindus have ‘also’ approach because they have the vision of Oneness for the whole existence. As Hindus view everything in the existence as the expression of One, all the manifestations are revered and, are accepted. There is respect for the diversity. As everything is expression of the One, the human being   too is not interpreted as the sinner but as immortal, embodiment of potential divinity. This is the message that India has to give to the world.

For the first time to that Western audience which was used to the exclusive claim to religious truth Swami Vivekananda gave the message, “Much has been said of the common ground of religious unity…. But if anyone here hopes that this unity will come by the triumph of any one of the religions and the destruction of others, to him I say, “Brother, yours is an impossible hope” ….If the Parliament of Religions has shown anything to the world it is this: It has proved to the world that holiness, purity, and charity are not the exclusive possessions of any church in the world, and that every system has produced men and women of the most exalted character. In the face of this evidence, if anybody dreams of the exclusive survival of his own religion and the destruction of others, I pity him from the bottom of my heart, and point out to him that upon the banner of every religion will soon be written, in spite of resistance, “Help and not fight” “Assimilation and not Destruction” “ Harmony and Peace and not dissension.”

For the first time, the message of universal Brotherhood and its proper understanding was given to western audience by Swami Vivekananda. Therefore, Mananeeya Eknathji wanted this day to be celebrated as Universal Brotherhood Day. Homogenizing the humanity or bringing uniformity in the human society as some exclusive religions or ideologies want to do, will not usher in Universal Brotherhood but it will only bring further dissentions and destruction. Integrating the various faiths and accepting, as ‘others’ faith also is good for them, will bring in Universal Brotherhood. Homogenizing brings destruction of the identity and also the traditional values in the society whereas the integration and seeking harmony keeps the identity of the communities intact and binds them in the bonds of Brotherhood. Therefore, the message of Universal Brotherhood Day is also for those who are very exclusive in their approach and are undertaking the conversions by destroying the faiths and culture of various tribal and other communities.

Hindus with their philosophy and practice of inclusive approach are destined to give this message of Universal Brotherhood to the humanity. But in order to do that first Hindus will have to understand this unifying and integrating nature of their Dharma. In the Parliament of Religions Swami Vivekananda also gave us the unifying principles of Hinduism. As put very beautifully by Sister Nivedita, “Of the Swami’s address before the Parliament of Religions, it may be said that when he began to speak it was of “the religious ideas of the Hindus”, but when he ended Hinduism had been created.…These, then were the two mind-floods, two immense rivers of thought, as it were, Eastern and modern, of which the yellow-clad wanderer on the platform of the Parliament of Religions formed for a moment the point of confluence. The formulation of the common bases of Hinduism was the inevitable result of the shock of their contact, in a personality, so impersonal. For it was no experience of his own that rose to the lips of the swami Vivekananda there. He did not even take advantage of the occasion to tell the story of his master. Instead of either of these, it was the religious consciousness of India that spoke through him, the message of his whole people as determined by their whole past.” Thus, on the Universal Brotherhood Day we have to study, absorb and highlight the message that Swami Vivekananda gave in the Parliament of Religions. Not just the lecture given on the first day of the parliament, which is very well known, but the main lecture that he gave in the Parliament of Religions - “The Paper on Hinduism” needs to be studied. What he told in that lecture to the western audience, he told it to us in his famous lecture ‘Common Bases of Hinduism’ at Lahore. It is the study and application of these lectures, which will make us capable of giving the message of Universal Brotherhood Day to the world.

But it is also to be remembered that by appeasing the followers of exclusive theology in vain search of peace only emboldens the exclusive forces to the detriment of all. At the same time this also is to be remembered that when we work against the exclusive forces, we are neither against the Jesus or Allah or our Christian or Muslim society. We also should not go into the habit of branding the whole communities as bad for the bad acts of certain elements in those communities. By doing that even well-meaning persons in that community get pushed into exclusive and extremist mode. Thus, it is neither the rejection nor appeasement but it is with self-assertion and also working for good of all and for the harmony of mankind   that will bring the brotherhood universally. As Swami Vivekananda had said the approach has to be, “Help and not fight” “Assimilation and not Destruction” “Harmony and Peace and not dissension.” It is a difficult goal, but not unachievable and if there is any civilization in the world which has philosophy and inner strength to work for it, it is this, ours Hindu civilization.

We should see that during the program, the points given below are stressed which Swami Vivekananda had put forward very candidly as well as without hurting the people:

·        The really spiritual is always universal and inclusive. Rejection of others’ God as false shows ignorance about one’s own God too.

·        Today, inclusiveness or universal approach is presented as appeasement of detractors or compromise with the interests of the nation or people. By appeasing the aggressive forces, they do not calm down but become more aggressive. Similarly standing for the interest of one’s own people also does not mean denouncing others or rejecting them permanently. Many a times certain violent acts of some elements in the other people is generalized and all are blamed. Even that is not correct. It pushes even the moderate people in those communities to the aggressive mode. Thus, this balance is to be maintained of protecting the interest of our people at the same time taking others with us, It will help in promoting universal brotherhood. Fear, appeasement, impracticality or hatred should not be the motivating factors when we work in the interest of the society. As Bhagawan Sri Krishna said it should be Yudhyaswa Vigatjwara. If you have to fight, fight but without hatred.

The very existence of India is to contribute these thoughts for the good of the humanity. Therefore, she could exist in spite of so many vicissitudes and attacks in her national life. Whenever this national destiny was forgotten, the degeneration set in. Thus, Swami Vivekananda’s message in the Parliament of Religions though it was of Universal Brotherhood, it has been the national destiny of India. It also became the call for the renaissance of our Hindu nation.

In the construction of Vivekananda Rock Memorial, we see the dynamics of Universal Brotherhood were practiced by Mananeeya Eknathji. Working for Universal Brotherhood does not mean giving up one’s path and just compromising or forcing one’s thoughts on others but it is being firm on what is valid but also striving to take everyone together. There was stiff opposition at local level and at governmental level. To diffuse that Tamilnadu government had offered Eknathji a piece of land at the shore for building the memorial. Eknathji did not deviate from the mission of erecting the Vivekananda Memorial on the Rock where Swami Vivekananda had meditated. However, he also saw to it that in the process no one is antagonized. When construction was almost getting over someone had tried to throw a country bomb, but he did not hold the whole community responsible for it. He saw to it that the unwarranted incident was contained and was not given undue importance. Practicing the message of Swami Vivekananda, Eknathji saw to it that the grand memorial was constructed on the Rock and it became a rallying point for all constructive forces in the country irrespective of their caste, creed, community and region.

India has to claim its rightful place, and emerge as a mighty nation. Her strength is not in dominating or destroying others but it is to bring the blessings and peace to the humanity. She demonstrates and teaches the civilizations of the world to value the diversity with mutual respect and at the same time to focus on the Oneness of existence. It is this work of Bharat which would usher in Universal Brotherhood towards which, we all have to work.
Nivedita Raghunath Bhide
Download Yuva Bharat September2020 from DropBox
Download Yuva Bharat September2020 from Google Drive
at 14:21 No comments: