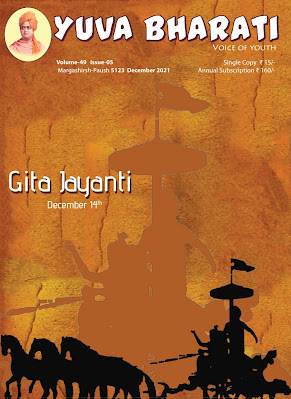 To say that the Bhagavad Gita is a solution to modern problems does not mean that it is a readymade panacea for all our present troubles. The Gita serves to enlighten a person with a philosophy by which he can find solutions to current problems. The book has not lost its relevance with time since it is rooted in eternal truths - truths which are fundamental to humans and to the laws of nature.

The Gita is not just a religious book. Nor is it just a scientific treatise. It is a comprehensive world view. It does not reject spirituality as does Communism. Nor does it deny the realities of worldly existence and material needs. It balances the dual needs of spiritualism and materialism.

For Individual and Society

Another unique feature of the Gita is that it does not concentrate solely on individual 'Moksha'. It seeks to offer itself as a guide to society as well. The symbiotic relationship between the individual and the society is recognized by this book. The Gita exhorts the individual to carry out his duty - ‘Karma’ - so that it serves himself as well as the society around him. There is no scope for spiritual enlightenment of an individual who turns away from society and the material world.

The Gita provides a multifaceted outlook. Different 'darshanas' reveal different paths to spiritual enlightenment. The path of Action - Karma Yoga, the path of Knowledge - Jnana Yoga and the path of Devotion - Bhakti Yoga. In the Gita all these different methods are integrated. In this integrated approach, the different facets of the individual are given due importance. Thus the Gita serves as a blueprint for overall personal development.

Though the Gita was delivered at a particular period of time at Kurukshetra, its relevance has not been limited by time or space. The battlefield of Kurukshetra and the despair of Arjuna are phenomena of eternal recurrence in the mind. The confusion and despair among the present-day youth is similar to Arjuna's dejection. The weakness which drives our people to suicide when confronted with the simplest of failures, the withering away of ideology and ideals, the arrogance born out of ignorance, the cynicism which rejects as hopeless every effort to reform the society are all but manifestations of an inner despair. A feeling of hopelessness is apparent in the face of the present-day youth who refuses to look at problems squarely in the eye. Arjuna too was in such a predicament. The Bhagavad Gita which once saved Arjuna from his dire predicament is the answer to the demoralization of the present generation.

The Gita starts with an exhortation against weakness. It calls on Arjuna to abandon his despair as despair in no way suits such a brave warrior. This psychological approach is relevant to the youth of India who face a crisis of confidence and identity. It serves as a bulwark against the weakness of spirit which prompts modern day Arjunas to abandon hope and opt for the suicide solution.

It is not sufficient to reject despair. A positive alternative is required. Here too, the Gita shows the way. Self-help and self-sufficiency is the Gita approach. It is not advisable to depend upon others for self-development. Each individual and each society should develop by independent effort. What happens otherwise? Each one becomes a burden to oneself and to others. Next time the Gita thus provides a model which cautions against the dependence of the present-day youth on foreign help, goods or inspiration.

The book calls on us to be independent and self- sufficient. Do your duty - it says - each one has his own duty. Without this one cannot even support one's own body.

The attitude of our youth which prompts them to desist from dirtying their hands by an honest day's work, an attitude which makes him like the lazy way out. The Karma Yoga is an answer to this destructive work ethic.

The Gita elaborates on the concept of duty. It calls on us to fulfil our 'Karma' with an attitude of devotion - 'Yajna Bhavam'. When the Karma - duty - is done with an attitude of devotion and for the society as a whole it becomes 'Yagna'. One who performs his duty, only for himself, misses this exalted concept. In that case there is no devotion. Even when one cooks food for only oneself, it is considered to be a sin by the Gita philosophy. The Gita calls upon us to give the fruits of Karma to the society and to partake only what is essential for oneself. Such a doer is free from all sin.

So the doer is not free to accumulate all the fruits of his own labour. He can take what is needed. Yet he is only a Trustee of the wealth. The owner is the Almighty. The owner is the Society. The doer deserves only the remanents of his offerings. This relationship between Karma and the fruits of Karma is a quantum leap from the ideas of surplus value and exploitation of labour as enunciated in this classical communist/ capitalist dogmas.

Perhaps the most striking part of the Gita philosophy is the idea of Co-operative Development. The scripture rejects the idea that conflict and competition are the methods of achieving the highest good. Instead the emphasis is on co-operation. Competition ensures the survival of the fittest. Yet, the vast majority is marginalized in this rat race. Co-operation on the other hand ensures all-round development. Thus the Gita philosophy takes under its wings the society as a whole. If all of us are but parts of the Almighty, then, is not co-operation the natural path of development? Is not competitive conflict a denial of this holistic concept? Is it not denial of Godliness? Rejecting the western concept of the survival of the fittest as ungodly, the Gita emphasizes on the path of spirituality with co-operative development. It details this idea of wealth distribution.

The model of co-operative development is not confined to man alone. The relationship between man and nature is also part of this model. The scripture calls for co-operation, not just between man and man but between man and the Devas. By 'Devas', the Gita seeks to personify the force of nature. This, it says, can be achieved through Yajna. Yajna i.e. devotion should be according to the laws of nature. When we deviate from its path, we tread through danger, as we go against nature itself. The environmental destruction undertaken by the modern society in the name of development is thus opposed to the teachings of the Gita.

The Gita shows the golden mean which ensures the protection of environment along with the pursuit of 'development'.

The Dharma of W ealth

The Gita is not against the creation of wealth or the pursuit of material happiness. In fact it encourages wealth creation and material enjoyment. But both activities should be based on 'Dharma' and aimed at 'Moksha'. In that context wealth and desire become divine.

When wealth and desire are built on the ideals of Dharma and Moksha, luxury and competitive consumerism become meaningless. When desire, and rage which stems from the denial of the object of desire predominate, sinful actions result. The Bhagavad Gita condemns the trio - Kama, Krodha, Lobha. For, are not the conflict between individuals and nations based on these sins? Does not these lead to suffering?

While condemning this destructive path, the Gita offers solace to the strays. The sinner need not feel dejected. When one turns towards God one automatically becomes cleansed. He becomes 'Dharmathma' and achieves eternal peace of mind. 'My devotee is never destroyed' says Lord Krishna. 'Those who constantly meditate on myself will get everything they need' the Lord promises.

The Gita is scientific to the core. The very spirit of science is the freedom to seek, question, experiment and to accept only if and when one is satisfied. The Gita too accepts and encourages this scientific spirit. It does not call for accepting its philosophy blindly. Nor does it want us to reject other teachings as blasphemy. Even in the midst of the conflict of Kurukshetra the Lord urges Arjuna to question. Afterwards Krishna reinforces the Gita philosophy with a demonstration of his own Eternal, all- encompassing self - the 'Viswa Rupam'. Finally the Lord advises Arjuna to critically analyse everything he (Krishna) has said and only then to adopt whatever he (Arjuna) feels appropriate. No other holy scripture offers such intellectual freedom. The Gita urges us to be critical of even the Vedas. It is this scientific spirit which has maintained its relevance through this yuga of science.

In essence, the Arjuna-Krishna dialogue is but a symbolic one. Arjuna is the warrior. Krishna the philosopher. Arjuna is the doer. Krishna the guide. When there is a convergence between two such entities there will be prosperity and victory of justice. It is such a conference that is desired by everyone. The Gita shows us the path to such a convergence. This is the greatest teaching of the Bhagavad Gita.