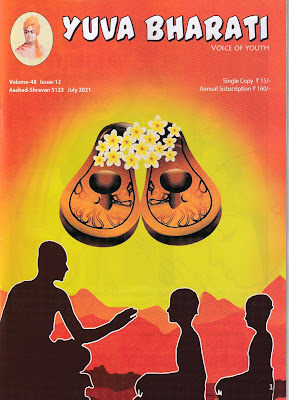 Guru Purnima: We all enjoy festivals. Utsavas - festivals are for cultural continuation, for expressing the joy of life, strengthening the collectives like family, community, society, and nation and for expressing the gratitude towards the creation. Utsarati iti utsava - Festival is that which elevates us.

India is full of various festivals. The characteristic of our festivals is that no festival is without pooja. No festival is just for merry-making though in every festival we do enjoy. The festivals are to make us relevant in time as well as to continue our tradition. That is what made Hindu dharma and our nation as Nitya Nootan Chira Puratan - that is ‘ever new and most ancient’. Some festivals are celebrated ceremoniously with all splendour on large scale and some are celebrated quietly but very meaningfully. The festival of Gurupurnima comes in the second category. This year the Gurupurnima festival is coming on 23rd July.

This festival is celebrated on Ashadhi Purnima which is Jayanti - the birth anniversary of Maharishi Veda Vyasa, a son of  Rishi Parashar and  fisherwoman Satyawati. What was his work that made him so exalted a being that on his birthday Gurupurnima is celebrated? He did a fourfold work.

First, when he saw that the Vedas, which are a voluminous store of knowledge discovered by seers over the ages, were in the fear of getting extinct, he collected and compiled them.

Second, to protect Vedas, he allotted its Shakhas (branches) to various families to be preserved by Guru-Shishya tradition. That is in a family, father would teach to his son and along with that to some other willing and deserving children. It would also happen that the children would come from far off places and stay with the reputed Guru who would treat them as part of his own family. Gradually, the famous Gurukula system of India developed. In today's language it was the most extensive and privatized system of education in the world. Thus a very natural way of protection of knowledge as it was family based was devised by him.

Third, it was not just the Vedas but all the other branches of knowledge called as Upavedas like Ayurveda including Surgery; Sthapatya Veda which means sculpture including everything related to construction with metals, stones, mortars and wood; Gandharva Veda covering music, vocal and instrumental, dance, drama etc; Dhanurveda all skills and knowledge related to military warfare were also systematized by Veda Vyasa allotting its branches to various families and communities. Thus each family of every community became a repository of a branch of knowledge and so continuing the family tradition got equated with continuance of knowledge.

Fourth, for the common man to understand the Vedic truth he also composed Puranas and Mahabharat, so that the application of Vedic truth in life is clear to all. Religion is not just in believing but in being and becoming. Not just the information about one's religion but realizing the truths and then expressing it in our lives was the aim of Sanatana Dharma.

In this Guru-sishya tradition, the knowledge is learnt by observing the life of the Guru who may be one's own parents or a realized soul. Veda Vyasa succeeded in preserving and inculcating the respect for tradition. It is because of Vyasa that our Vedic knowledge survived and also the importance of Guru-tradition got established. Thus this is a day to remember all the Gurus who have contributed in continuation and propagation of our eternal tradition.

This sacred day also marks the very first transmission of the yogic sciences from Bhagwan Shiva - the Adiyogi or First Yogi - to the Saptarishis, the seven celebrated sages. Thus, the Adiyogi became the Adi Guru or the First Guru on this day. The Saptarishis carried this knowledge offered by Adiyogi throughout the world. Even today, every spiritual process on the planet draws knowingly or unknowingly from the knowledge given by Adiyogi.

Therefore, traditionally this is also the day to remember our whole tradition of Guru starting with Bhagwan Siva and to offer our respects to the Guru who guides us in life, who has handed over the tradition of knowledge and wisdom to us. This is also a day to express our gratitude and commitment to the Guru for carrying forward our culture vibrantly, with the vision of 'Krinvanto Vishwamaryam - let us make the whole world noble.'

Paying our obeisance to Guru on the day of Gurupurnima also means that like Veda Vyasa we shall work to protect our culture in changed times. We have to train our mind that we learn from everything and everyone around us about how to move toward our goal. On Gurupurnima day, let all of us introspect, analyze and vow to do our best for `1fulfilling our responsibilities towards our Country, Our Dharma and our society.