Swami Vivekananda's historic meditation on the Sreepada Shila in Kanyakumari

Have you ever heard of a young unknown Wandering Monk doing Dhyana to know the root cause of the downfall of a great nation from its pinnacle of spiritual glory to the depth of degradation? 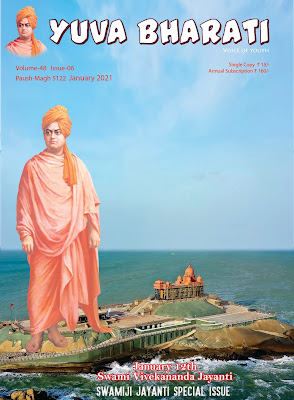 Have you ever heard a young sanyasi with full of vigour and vitality, doing Dhyana in the midst of ocean, in an isolated spot, to plan for the revitalisation of the dormant Hindu Society, living like worms in the gutter water under the tyranny of British rule.

Yes! It happened at Kanyakumari, the holy Sreepadam of Bharat Mata where the three oceans meet to wash Mother’s feet uninterruptedly from time immemorial.

That young monk was Swami Vivekananda who reached Kanyakumari on 24th December 1892 after a long and strenuous journey starting from Kolkata in the year 1888.  In his long and hazardous sojourn he visited most of the holy places of North India and then came down to south after covering the states of Rajasthan, Gujarat, Maharashtra, Mysore and Travancore Cochin. It was a great education for the youthful Swamiji meeting people face to face and knowing their trials and tribulations. He had occasion to live with Kings, princes, rich businessmen, intellectuals and also often with common men. He could visit many of the historical places of India and saw how many Hindu temples, libraries and cultural centres were want only destroyed by the unscrupulous and barbaric Muslim invaders. He also could gauge to what extent India’s treasuries containing precious wealth were looted by the British rulers. He could see with his own eyes how the masses of India are living in poverty and disease. Swamiji’s heart pained to see how the English educated Indians were serving the British masters, forgetting their own brothers living in most pitiable condition.

He reached Kanyakumari with a very heavy heart. He remembered his Guru Sri Ramakrishna’s words: “Naren, you have to do Mother’s work”. But Swami Vivekananda was not very clear about what his Guru had said while he was alive. Having reached Kanyakumari, as a worshipper of Shakthi, Swamiji decided to go to the temple of Goddess Kanyakumari, one of the oldest and well-known places of Devi worship in the southern part of India. He entered the temple and prostrated before the deity, with tears rolling down from his eyes and deep pain in heart. He sat and prayed to the Goddess, “How can I serve you, Oh Mother! Are you not able to see the living condition of your children under a unholy regime. Show me the way that I can be an instrument in Thy hands, for giving them freedom from the foreign yoke. Let my country and my people regain their lost glory and manliness”.

After having a face to face dialogue with Mother, who was personified in the beautiful deity, Swamiji came out of the temple. What a beautiful sight was waiting for him! A long stretch of beach of colourful sand, comprising red, black and white spread out to the far extent. Swamiji walked in the beach for some time. He saw the confluence (Sangam) of the three oceans. Also he could see from the beach, the Rock, known as Sreepada shila. He learnt from the people moving around in the beach that the Rock in the midst of the ocean has a Foot print of Goddess Parvati and local Hindus visited the Rock during the festival days. As he heard this he felt an intense urge to go to the Rock and spend some time in that isolated spot, in contemplation.

His urge was so intense that he jumped into the sea and swam to the Rock, all alone, braving the waves and sharks. He climbed over the rock and saw the foot print of Goddess Parvati. As he looked towards North, he could see the vastness and feel the greatness of our Motherland. Swamiji could visualise the undivided Hindu Rashtra extending her cultural influence by peaceful means from Iran, Afghanistan to South East Asia.

Soon the young Swamiji fell into a deep meditation. It was a meditation, not for his own mukti, but for the salvation of an age old nation and its people from the oppressive foreign domination.  Sri. P.Parameswaranji, writes in his preface to the book titled “Arise! Awake!!” Swamiji’s quest for the eternal covers millennia of India’s history at the spiritual level which of course is the true source and strength of India in all its facets of national life. Naturally, it is the saints and sages, spiritual stalwarts whose appearance at each turning point of our national life that shaped our collective identity and made it what it is. Not that India was lagging behind other nations, in material advancement and achievement, but the governing principle that influenced all such endeavours was spirituality”.

After three days and night of deep meditation, Swamiji regained his consciousness. The epoch making Dhyana transformed the young Sanyasi, from an ordinary monk to a world teacher, to a great social reformer, an organizer par - excellence, a spiritual dynamo. Yes! Saviour of Mother India and her children has arrived on the world stage. It was the beginning of the eruption of a spiritual volcano, which is going to unleash its hither to hidden powers for the next several generation. No power on the earth can stop it. It is the power of a “Shakti”, which wanted to work through Swami Vivekananda”.

On reaching the mainland, when asked by some curious people as to what was he doing for such long time, he simply replied that the world will come to know about it very soon. But at Madras while he was talking to some of his close disciples he said, “At Kanyakumari sitting at the last bit of Indian soil, I hit upon a plan”!  He further elaborated that his plan was to organise the Hindus and awaken their dormant spiritual power. During his long wandering he could see the people of Bharat are divided into various caste and groups. Nowhere he saw unity among Hindus. He saw not only a disorganised Hindu society but also one which lost its spiritual moorings. Therefore Swamiji’s epic meditation on the rock gave him the vision and mission for the life.

Swargeeya Eknathji Ranade, the spirit behind the Vivekananda Rock Memorial and Vivekananda Kendra, while describing the posture of the Statue installed on the Memorial, said, “that it is a very unique posture. I wanted it to be seen by all that the Swamiji has just got up from his meditation with full of determination to do something great. Swamiji’s face and eyes reflects “Gambeerya” (firmness), his erect body shows the power, of lightening, and his putting right foot forward indicates, the onset of a spiritual tornado.

Swamiji felt that the time tested Vedanta philosophy of oneness must be taken to the west. There was no point in teaching this philosophy to the starving millions of our country. What they need immediately is food, water, shelter, clothe to wear and medicines. Swamiji said, “Yes, I shall go to the West, where the materialism rules. I will give the West, the message of Vedanta and in turn get material help and modem science and technology for our countrymen who are in dire need of it.

On 11th September 1893, a Vedantic tidal wave hit the Parliament of Religions at Chicago, which was organised to show the supremacy of the Christianity over rest of the world. Swami Vivekananda, in his inaugural speech of 2 ½  minutes duration set fire to the vast assembly, which reverberated from one corner to another corner of the world. The speech mystified the whole audience and brought a great attitudinal change in their mindset towards Santana Dharma and particularly about India. That day onwards, the Vedanta of the Hindus took the center stage. From Chicago, the Vedantic tidal wave spread to whole of America, Britan and France. Hither to unknown Indian sub-continent turned into a spiritual lighthouse for the humanity.

After his historic triumph over the west, Swamiji returned to India in 1897 to a rousing welcome given to a sanyasi hitherto unknown in the history of our nation. Seeing the overwhelming reception given to him by the people of Madras, Swamiji, while addressing the vast gathering of young men and women told; “For the next fifty years this alone shall be our key-note-this, our great Mother India. Let all other vain gods disappear for the time from our minds. This is the only God that is awake, our own race - “everywhere his hands, everywhere his feet, everywhere his ears, he covers everything.” All other Gods are sleeping. What vain gods shall we go after and yet cannot worship the God that we see all around us, the Virat? When we have worshipped this, we shall be able to worship all the other Gods what is needed is chittashuddhi, purification of the heart. And how does that come?  First of all worship is the worship of the Virat ……. of those all around us.  Worship it …. These are all our gods - men and animals; and the first God we have to worship are our countrymen. These we have to worship, instead of being jealous of each other and fighting with each other. It is the most terrible Karma for which we are suffering and yet it does not open our eyes (CW-III 300-301).

Eknathji Ranade, therefore very aptly adopted the Motto of Vivekananda Kendra as “Serve man- Serve God”, with the twin objectives of Man-making and Nation building as envisaged by Swami Vivekananda.

There is only one way of organising the Hindu society, that is by rendering Nishkama Seva and there by slowly awakening the dormant divinity covered with impurity and selfishness.