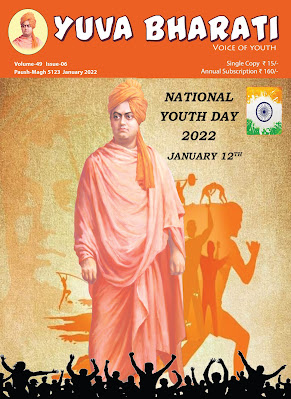 Swami Vivekananda sat on the mid-sea rock at Kanyakumari and meditated for three days on 25, 26, and 27th December 1892. This was a unique meditation. It was not for Samadhi, for Moksha or for one’s own peace of mind. Swamiji meditated there on what should he do, what should be his contribution for regeneration of India. It is there on that Rock that he took the momentous decision of participating in the Parliament of Religions at Chicago to represent Hindu Dharma. He was confident that when the Hindu philosophy is admired at the international forum, the people of his country would come out of the colonial mind-set and work for the regeneration of India, for making India capable to fulfil her destined role. That is why Vivekananda Kendra celebrates the period from 25 December to 12 January that is Swami Vivekananda Jayanti as Samartha Bharat Parva.

The freedom movement was mainly to express the soul of India which was suppressed by the British colonial powers. Swami Vivekananda gave a rousing call to Hindu nation. He emphatically said that he was proud to be a Hindu. Sri Aurobindo said Sanatana Dharma is the nationalism of India. Mahatma Gandhi talked about establishing Ramarajya. Sri Bankim Chandra called India as Durga incarnate. The freedom movement was not for political rule alone but to express Indian soul in all walks of life.

When Swami Vivekananda called upon the Hindu nation to give the eternal truth of Oneness to the world, one might think, “Why this jingoism, this chauvinism? Does it not imply that other countries have nothing good in them?” Swami Vivekananda explained how every nation has a role to play. He said,

Just as there is individuality in every man, so there is a national individuality. As one man differs from another in certain particulars, in certain characteristics of his own, so one race differs from another in certain peculiar characteristics; and just as it is the mission of every man to fulfill a certain purpose in the economy of nature, just as there is a particular line set out for him by his own past Karma, so it is with nations -- each nation has a destiny to fulfill, each nation has a message to deliver, each nation has a mission to accomplish. Therefore, from the very start, we must have to understand the mission of our own race, the destiny it has to fulfill, the place it has to occupy in the march of nations, and note which it has to contribute to the harmony of races.

The question that needs to be asked is, ‘What is it that India has to give to the world, or contribute to the harmony of the races?’ India’s mission is spiritualization of the humanity. Swami Vivekananda said,

This is the theme of Indian life - work, the burden of her eternal songs, the backbone of her existence, the foundation of her being, the raison d’être of her very existence -- the spiritualization of the human race. In this her life-course she has never deviated, whether the Tartar ruled or the Turk, whether the Mogul ruled or the English. (CWSV, volume IV, p. 315)

Sri Aurobindo explained in his Uttarapara speech what Sanatana Dharma is based on the Sadhana that he did in the Alipore jail and also the realizations that he had. He told,

We speak often of the Hindu religion, of the Sanatana Dharma, but few of us really know what that religion is. Other religions are preponderatingly religions of faith and profession, but the Sanatana Dharma is life itself; it is a thing that has not so much to be believed as lived. This is the Dharma that for the salvation of humanity was cherished in the seclusion of this peninsula from of old. It is to give this religion that India is rising. She does not rise as other countries do, for self or when she is strong, to trample on the weak. She is rising to shed the eternal light entrusted to her over the world. India has always existed for humanity and not for herself and it is for humanity and not for herself that she must be great...

But it is not circumscribed by the confines of a single country, it does not belong peculiarly and for ever to a bounded part of the world. That which we call the Hindu religion is really the eternal religion, because it is the universal religion which embraces all others. If a religion is not universal, it cannot be eternal. A narrow religion, a sectarian religion, an exclusive religion can live only for a limited time and a limited purpose. This is the one religion that can triumph over materialism by including and anticipating the discoveries of science and the speculations of philosophy. It is the one religion which impresses on mankind the closeness of God to us and embraces in its compass all the possible means by which man can approach God.

Mahatma Gandhi wanted Ramarajya in India. What did he mean by Ramarajya? This question only the confused educated elite may ask. The people instantaneously understood and cherished the thought of fighting for freedom to have Ramarajya. The ideal Ramarajya, according to Gandhi, may be described as ‘the land of dharma and a realm of peace, harmony and happiness for young and old, high and low, all creatures and the earth itself, in recognition of a shared universal consciousness. In many places he wrote or talked about Ramarajya. As was the audience in front of him, he explained the concept in the language they understood. Sometimes it was at the spiritual level, or with respect to political rule or in the context of justice to women or to the poor of India. Few quotes are as below.

By political independence I do not mean an imitation to the British House of commons, or the soviet rule of Russia or the Fascist rule of Italy or the Nazi rule of Germany. They have systems suited to their genius. We must have ours suited to ours. What that can be is more than I can tell. I have described it as Ramarajya i.e., sovereignty of the people based on pure moral authority. (H, 2-1-1937, p. 374)

If you want to see God in the form of Ramarajya, the first requisite is self-introspection. You have to magnify your own faults a thousand-fold and shut your eyes to the faults of your neighbours. That is the only way to real progress. (H, 26-10-1947, p. 387)

But if we take the gist of all his writings and speeches, Ramarajya was supposed to be based on Dharma in which, moral uprightness, care for others, feeling of oneness, integrity of character and equality was inherent.

Today the narrative in the country, in the media is vitiated. It would be difficult for any leader to tell in the open that India is a Hindu Nation or Sanatana Dharma is Nationalism or India need to be Ramarajya or India is Durga incarnate. The drives of freedom movement, the objectives of freedom movement are negated in media, in educational institutions and unfortunately in the minds of many elites. No person of some standing can openly talk of India as a Hindu nation or tell Sanatana Dharma as nationalism or calling for Ramarajya. He would be abused as communalist, or even threatened by anti-national forces openly.

The ‘Swa’, the ‘Atman’ of India is still not expressed fully in all walks of life. How did it happen? Since 1947, the guilt of the partition of India made the then political leaders to be yielding space to the non – Hindu forces in media, education, and over-all public discourse. Where would that lead us in decades? Eknathji had seen the writings on the wall.  That is why Eknathji wanted Vivekananda Kendra as a thought movement which would focus on the ‘Swa’ of India which comes from the Vedic vision of potential divinity of human soul and the oneness of existence. Thus, man is to strive for manifesting the Divine, the excellence, in all endeavors; and Oneness of existence if internalized motivates the man to serve the society, nation and nature. ‘Swaraj 75’ is a proper occasion to revisit the objectives of the freedom movement.

Even when facing barbaric forces and under the gravest provocations, our civilization has consistently, propagated non-conflicting ideas and practiced non-conflicting methods, because Oneness of existence is ingrained in Indian culture. The history of Bharat is replete with such instances, where, when Dharma was threatened, the spiritual vision and practical action organized the society to lift the nation from its morass and put it on its course. This has happened time and again. This is how the nation, that seemed to have lost hope, was always revived by the combination of spiritualism and activism such as Srikrishna and Arjuna, Samarth Ramdas and Chatrapati Shivaji, Vidyaranya Swami and Harihara Bukka and so on.

Later the advent of Ramakrishna-Vivekananda and Swamiji’s fiery words delivered in his lectures from Colombo to Almora revitalized the spiritual nationalist surge which was manifested in the freedom movement. Then followed the great pantheon of leaders who fought for the freedom of Bharat. These freedom fighters had envisaged a glorious Bharat rooted in Sanatana Dharma and as the spiritual guide to the humanity. Their dream we need to remember at the time of Swaraj 75 and accordingly hasten our activities to actualize it.

Swami Vivekananda ignited the Youth power of Bharat and unleashed it to free the nation from foreign yoke. His words have the power to rouse the youth to work for nation to establish her as Jagadguru.