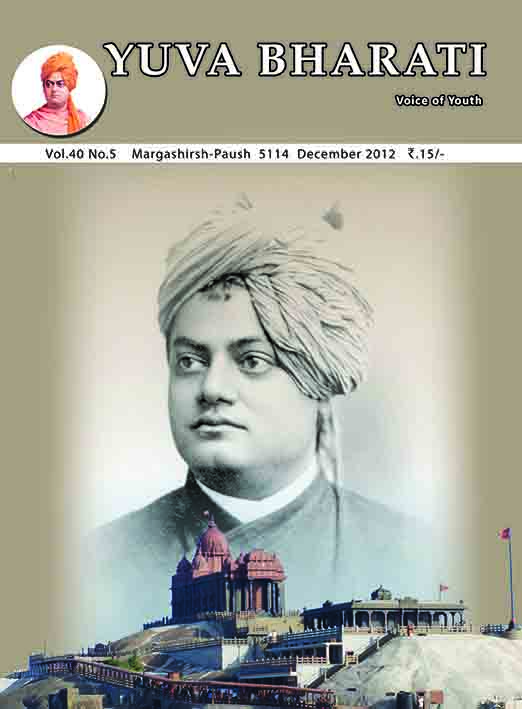 December has a very special place in Sri Ramakrishna – Vivekananda tradition. It was on December  of 1892 that Swami Vivekananda meditated in solitude for three days and three nights on the rock with waves roaring around him. Like Nachiketa who waited in solitude at the gates of Yama to penetrate the mystery of the very existence, Swami Vivekananda meditated on the mystery of the National Existence of India – feeling the Essence of its spiritual heartbeat. Like Siddhartha of Sakhya clan who felt the sufferings of all beings in his own heart and meditated to discover the ultimate liberation, Swami Vivekananda felt the pain of the Nation and Her multitudes, pulsating in all intensity in every cell of his being and he sought a vision to galvanize Her children from her slavery and slumber.

A mendicant young monk was given a vision and a nation rose from her deep sleep resolving a mission.

Sri Ramakrishna - Swami Vivekananda tradition is unique in the spiritual history of India. Swami Vivekananda was the first Hindu monk to tell in modern times that our downfall was due to the neglect of the masses.  We need to take the Vedantic message to the masses of India and then they shall liberate themselves.  However Sri Ramakrishna – Swami Vivekananda did not stop at mere taking of Vedanta to the masses. The very notion of superiority and inferiority which is well rooted in the socially stagnant pseudo-culture of traditionalists had to be destroyed utterly. And that is not easy. As Dr.Ambedkar rightly points out the inequality of the system is not universal inequality in which case it could be easily combated. But it is 'graded inequality'. Such an inequality cannot be fought with binaries and hatred.  It needs extreme spiritual strength and courage. That courage and spiritual strength was given to the nation through the Sadhana of Sri Ramakrishna.

As Swami Ranganathananda Maharaj points out in his famous lecture 'Adi Shankara and the Untouchable', Bhagwan Sri Ramakrishna Paramahamsa's sadhana was unique in the history of humanity. It signifies a new dawn. Sri Ramakrishna cleaned the toilet of a Dalit, with his own hair, all the while praying to the Mother of the Universe, to remove all feelings of superiority or inferiority and praying to the Divine Mother to make Him the servant of all humanity.  And that is Karma yoga at the highest, the practical Vedanta in action. Today caste wars are fragmenting our society and our brothers and sisters are rendered homeless, killed and maimed in the name of caste. Forces of fragmentation are working overtime to exploit every injustice many real and some perceived. Cycle of violence is reinforced and rekindled. To break free of this cycle of violence one needs to break free of the conditioned mindset of caste differences. It is here that the meditation on this Sadhana of Bhagwan Sri Ramakrishna  will liberate us from the evils of casteism. It is a sure armour and also a weapon to unite and not divide the society in harmony, peace and justice.

Viewed from the hermeneutics of Sri Ramakrishna-Vivekananda tradition, the message of Bhagwad Gita becomes the message of social harmony too. Here Sri Krishna rejects the idea of Kula-Dharma as put forward by Arjuna and in its place He provides Swadharma – individual's Dharma. If this great leap forward is not enough Sri Krishna terms those who consider themselves superior by birth or lineage as 'demonic' (16:15).  Bhagawad Gita's Varna system is not only not birth-placed, it even implicitly ignores the stratified though organic symbolism of Purusha Suktha. After all when Bhagwan shows His cosmic form in which even timelines are subsumed, the Varna-mapping of Purusha Suktha is conspicuous by its absence. It should also be noted that contrary to the popular conception the word Varna is never mentioned in Purusha Suktha.  The origin of Varna system as elaborated in Brihadaranyaka Upanishad does not refer to any social gradation amongst the Varnas.(BU 1.4.11-15).  If we remember that the Upanishads are the epicenters of Sri Ramakrishna-Vivekananda Vedanta, then in the framework of Sri Ramakrishna-Vivekananda tradition, Bhagavat Gita becomes a strong spiritual source for social justice.

We live today in a fractured world and we live today in a wounded society. This month brings both Gita Jayanthi and also the days of meditation of Swami Vivekananda on the rock. May we dedicate ourselves to the mission and vision of Swami Vivekananda – which is to annihilate injustice through love and benediction, so that Mother India shall again arise and give this planet the message of Samanvaya. And that mission like charity begins right in our own house.