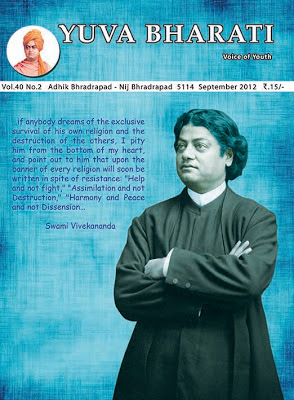 When Swami Vivekananda said the words, “Sisters and Brothers of America” at the World Parliament of Religions at Chicago, he also declared that the movement of Vedantic humanism has come of age. Vedantic humanism is fundamentally different from the humanist philosophies of the West in the sense that it is based on the fundamental unity of all existence manifested in the oneness of humanity. The West was then still struggling to come to terms with the idea of common unity of humanity and the discovery that humanity is but one branch in the grand tree of life as revealed by Charles Darwin.

Social Darwinism was the answer the West gave to Darwin's theory of evolution through natural selection. Both the left and right wing philosophers of the West, here we are not dealing with religious fundamentalists who outright rejected evolution but the philosophers of the West, embraced varying degrees of social Darwinism and speculated that non-European races are 'less evolved' and thus colonization was for them a justified social process which either eliminates or elevates the 'lower races' through a very slow process of 'civilizing' that happens of course under colonization. Even Marx and Engels were basically advocates of such a process. Here it should be stated that Charles Darwin himself was not very comfortable with the idea of social Darwinism.

Today the evolution theory of the ancient Yogis will be better understood in the light of modern research. And yet the theory of the Yogis is a better explanation. The two causes of evolution advanced by the moderns, viz. sexual selection and survival of the fittest, are inadequate….The result of this theory is to furnish every oppressor with an argument to calm the qualms of conscience. Men are not lacking, who, posing as philosophers, want to kill out all wicked and incompetent persons (they are, of course, the only judges of competency) and thus preserve the human race! But the great ancient evolutionist, Patanjali, declares that the true secret of evolution is the manifestation of the perfection which is already in every being; that this perfection has been barred and the infinite tide behind is struggling to express itself. These struggles and competitions are but the results of our ignorance, because we do not know the proper way to unlock the gate and let the water in. This infinite tide behind must express itself; it is the cause of all manifestation. Competitions for life or sex-gratification are only momentary, unnecessary, extraneous effects, caused by ignorance. Even when all competition has ceased, this perfect nature behind will make us go forward until everyone has become perfect. Therefore there is no reason to believe that competition is necessary to progress. In the animal the man was suppressed, but as soon as the door was opened, out rushed man. So in man there is the potential god, kept in by the locks and bars of ignorance. When knowledge breaks these bars, the god becomes manifest.

It should be remembered that the Western society post-enlightenment was drunk to saturation with the idea of eugenics and social-Darwinism. Those who were labeled invalids and hereditary criminals were barred from marriages and jailed. Sometimes they were forcefully made sterile. All these inhuman practices were justified in the name of social Darwinism. In India they enacted the 'Criminal Tribes Acts' and branded entire social groups as criminals based on birth. However Swami Vivekananda rose against the tide of Social Darwinism and declared that human evolution is based on qualitatively different process. It was only after the Nazi holocaust and the horrors of mass killing of mentally challenged and physically challenged populations as well as elimination of the ethnic groups labeled as 'inferior' by Nazi state machine that the Western thinkers realized the immense folly of their upholding of social Darwinism.

As against these there have been voices in isolated isles of the West which spoke against social Darwinism and interestingly invariably these voices had a Vedantic connection.  One such example is Pyotr Kropotkin. Kropotkin emphasized that not struggle but mutual cooperation is a strong process that shapes evolution. His book 'Mutual Aid a Factor in Evolution' was published in 1902. In 1900 he met Swami Vivekananda at Paris. Author P.Mukherjee writes: “The core of these meetings, I would like to believe (and believe) is to explore the distinctiveness of different shades of opinion, however, diverse they are or they might look to be.”

Swami Vivekananda's observation, that the evolution of non-human organic life and human evolution making an organically united yet a qualitatively different process is accepted by evolutionists today. Even die-hard neo-Darwinian like Richard Dawkins speaks of human evolution as governed by memes and extended phenotypes unlike the other organisms where genes and selection pressures alone determine evolution. This is a collective evolution. System biologists like V.I.Vernadsky speak of transition from biosphere to noosphere. Sri Aurobindo took forward the vision of Swami Vivekananda and spoke of supra-mental consciousness descending on the planet. And this vision never favored any specific race or culture but entire humanity. Both Sri Aurobindo and Swami Viveakananda recognized that all humanity owes its evolution to all humanity. In fact Swami Vivekananda rejecting the Aryan race theory sharply reacted to those who spoke high of their 'Aryan' superiority or Aryans civilizing the world thus: “If I am grateful to my white-skinned Aryan ancestor, I am far more so to my yellow-skinned Mongolian ancestor, and most so of all, to the black-skinned Negritoid!”

So what Swami Vivekananda set in motion on September 11 at Chicago is the continuing declaration of Vedantic humanist ideal which manifests itself when humanity liberates itself from the shackles of all artificial barriers it has built around it and realizes that it is part of the great Cosmic Divinity that permeates and animates all existence.
Aravindan Neelakandan
YB ET
Youth Icon : Yuvabharati Editorial : August 2012
at 17:57