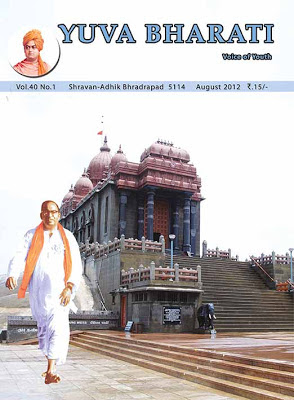 This call comes to you from our land's southernmost tip, where the waters of the three seas wash the feet of Mother India. This unique spot may be described as a perfect symbol of unity as well as sanctity. A meeting point of three oceans, it is also a place where the north and the south as also the east and the west lose their separateness. It is here, at the southern extremity of the country, that Virgin Kanyakumari, an incarnation of Goddess Parvati, the consort of Lord Shiva, has been standing in eternal Tapasya, longing to meet her Lord, whose abode is in the Himalayas in the distant north. It is again here only, that one's eyes can feast upon the wonderful spectacle of the golden disc of the morning sun, emerging from the Bengal sea in the east, and at the end of the day's journey, entering into the Arabian sea on the west, scattering a rich riot of colours on the horizon.

This message radiates from a place, which is a veritable symbol of purity and serenity as well. Fascinated by the serenity of the spot, Gandhiji said, "The place furnishes a sight unequalled in history; for this is no port of call for vessels; like the Goddess, the waters around are virgin.. .. This place is eminently suited for contemplation. I wish I were to stay here for ever."

A mind attuned to the elevating atmosphere here, soars high and penetrates deep and refuses to entertain any thought that is base or petty and narrow or ephemeral.

The humble musings, inspired at this hallowed place, will be broadcast to our readers, month after month, through these columns. It is but meet that a beginning is made, with the musings of the great patriot-saint, Swami Vivekananda, who came and meditated here eighty years ago.

What were the contents of Swamiji's meditation? In the words of his biographers (Life of Swami Vivekananda : By his Eastern and Western Disciples), "They were 'as deep as the Indian ages; they were all on India itself." "There, where all was silence, seated by himself on the last stone of India, he thought of the Purpose and the Fruition of the Indian World. He thought, not of Bengal or of Maharashtra, or of the Punjab, but of INDIA and of its very life. He passed in his thought through all the Indian centuries and he perceived, as few souls have ever done in India, the realities and potentialities of the Indian Experience."

"He saw the whole of India organically and synthetically as a great Master-builder sees the whole architectural design. He saw Religion as the very blood and life and spirit of the Indian millions. He saw its future regeneration as a whole, and he said in the silence of his heart, 'India shall rise through a renewal and a restoration of that Highest Spiritual Consciousness which has made of India at all times, the Cradle of the Nations and the Cradle of the Faith.'

"His mind surveyed the whole of India and everywhere he saw that the poor and the low had been oppressed and downtrodden for hundreds of years in turn by each Power that came in the flow of fortune to rule over them. But he saw that the worst masters and the worst fate that had ever befallen the masses came from within the pale of Hinduism itself. The autocracy of the priesthood, the despotism of caste, the terrible demarcations that these created within the social body, making of the majority of the followers of the Dharma, the outcasts of the earth, - these the Swami saw the almost insurmountable barriers that had blocked the progress of the Indian nation. Deep, deep down into the very heart of things his soul penetrated."

"He asked, with a start that shook his own personality to it very depths: 'But what have we, several millions of Sannyasins, bee doing for the masses? Teaching them metaphysics! This is all madness! Bhagavan Sri Ramakrishna was right when he said that religion was not for men with empty stomachs! How can the' millions rise, how can the millions be spiritual when they are starved? We have, first of all, to improve their material condition and give them education along this line, and then they will themselves solve their own problems. TO EFFECT THIS, THE FIRST THING WANTED IS MEN ."
Eknath Ranade
(This was published as the Editorial of August 1973 issue of Yuva Bharati)